My daughter turned me on to the Hamilton soundtrack. Whenever we get in the car, she plugs in her phone and starts singing. Hearing your own offspring ripping into clever, poetic, and inspiring music is a good way to get involved.

As we listened together, she started asking me about the accuracy and historical context of certain songs. Before I became a lawyer, I spent three years of graduate study in American history, but I was pretty rusty on the details of our early Republic. So I picked up the same biography of Alexander Hamilton that inspired Lin-Manuel Miranda to create the original “Hamilton Mixtape.”

Ron Chernow’s 818 page doorstop reminded me of three fundamental truths. Number One: I am a pretty fast reader when it’s a good story, which helps me get through the contracts and operational documents that comprise much of my day. Number Two: Alexander Hamilton was an amazing character who was involved in many issues that remain important today, including the origins and meaning of the American Constitution. Number Three: His principal battle was between advocates of a strong federal government, a group he led throughout his life, versus people who preferred authority spread among the states.

This last issue, centralized authority versus individual liberty, has resonated with me in the context of event planning and preparedness. Follow this, I think you’ll find it interesting.

> At the Mass Gathering Medicine Summit, I discussed planning for event attendees as they actually behave and consume controlled substances, not how we’d hope a sober, rational person would make personal decisions.

> At ISS 24/7’s annual focus group, I pontificated about the importance of incident reporting technology that even ordinary security and guest services people could use effectively. (Click here to watch a short video clip.)

> At ESA’s Severe Weather Summit, I explained why the venue should make weather-related decisions given their superior knowledge of local conditions over every visiting vendor. 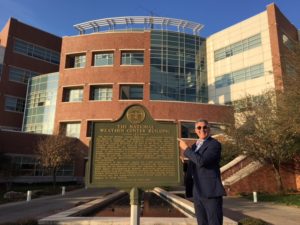 > At the Canadian Event Safety Summit, I previewed the soon-to-be-released Event Safety Access Training for entry-level industry professionals, because an online training program created by subject matter experts is more comprehensive and reliable than on-the-job training led by whoever draws the short straw at work.

> At a Retail and Hospitality Law conference, I began my presentation about the deficiencies in active shooter response training by pointing out that not one of the well-educated attendees had done anything to ensure that the person next to them (or on stage) was not armed and dangerous.

> In my Arizona State University law class, I had my students consider aspects of the 2011 Indiana State Fair disaster, with particular emphasis on how the cascade of large and small errors led to catastrophe and what could have been done differently.

In each instance, I began by showing examples of people who lacked situational awareness. They saw nothing and said nothing. They observed things that were amiss, and because our brains filter out or correct deviations from the norm, they said, ‘Yeah, that’s fine.’ In each instance, the solution had the same two components: (a) acknowledge that we are all flawed beings who suffer inattentiveness, indifference, confirmation bias, and a host of other reasons that we tend not to notice even obvious errors; and (b) create policies, procedures, training materials, and event plans that deal with us as we really are.

In the active shooter context, for example, we are taught to Run, Hide, or Fight. But most people don’t know what real gunfire sounds like, much less what it sounds like in a strange venue when it’s dark and loud and full of people. Run which way? Hide where? Fight with what? No, people need more information in order to know that they need to do something, much less what they should do. And given the historically-established likelihood that most people will do little to help themselves until they see someone else lead the way, teaching basic crowd management skills becomes one of the most essential tasks of all.

Back to Hamilton. In the live event industry, we currently live in a decentralized, Jeffersonian world. There are smart people with years of experience, but few written standards of what constitutes reasonable conduct. Because every event presents different challenges, we are an industry of artisans crafting individual solutions to problems, which can yield beautifully tailored work, but also chaotic decision-making that obstructs efforts to coordinate responses among different functional areas.

As a lawyer, I like plans and procedures because they make it easy to see what was supposed to happen, what each person’s role was in the event production. If everyone does their job and follows their training, and all that is documented, then it is relatively easy to defend their actions and those of their employer. The more decision-making is ad hoc and training is OJT, however, the more disorganization and disorder become reasonably foreseeable.

In other words, I find myself to be a Hamiltonian. In all of my work, I try to empower people to think through the actions in the context of the situation they face at that moment. But I am keenly aware, as you should be, that a significant number of people who help put on live events are modestly paid hourly workers, for whom the job is part-time or seasonal and simply not their ultimate career goal. Motivation, empowerment, and repetition are important if you hope to receive more than brute labor. I believe in training videos, checklists to slip into the plastic sleeve hanging from a worker’s lanyard, and policy documents that identify the most reasonably foreseeable risks for an event or venue and set forth recommended procedures to address those risks under various circumstances.

There is an old saying, “No plan survives first contact with the enemy.” I’m okay with that, as was the speaker, a 19th century Prussian general. Having a plan means that there is a basic framework for decision-making that all operational leaders should know. Then, if staff are well-trained, they can work within that framework to create solutions that are reasonable under the circumstances.

And we all want to behave reasonably under the circumstances, don’t we?