Last week, a friend sent me a rather apocalyptic article entitled, “1 in 5 Americans Avoid Concerts, Sporting Events Due to Physical & Cybersecurity Concerns.”  The article warns that a whopping “83% of Americans are concerned about a criminal attack causing physical harm at large-scale events, with half of respondents extremely or very concerned.”  This sounds bad!

As I read towards the bottom, I saw that it is based on actual data, just like I’ve repeatedly said is necessary before making big decisions.  In this case, a company conducted a survey of 13,000 consumers in 13 countries, including “more than 1,000 in the U.S.”  That seemed robust!

The article even offers a solution to the rising tide of fear: biometrics:

A large majority of respondents (81%) said they are comfortable with using biometrics, with 42% citing safety and terrorism prevention as the reason. About one-third of survey participants stated reliability as a reason, and about one-third cited convenience.

These figures seemed so impressively favorable that it made me wonder why survey participants who feared things they successfully survive every day would place their faith in technology they may have only experienced at an airport, if at all.  I was skeptical.

So I checked the source of the data, which is a company called Unisys.  A quick Google search reveals that this company sells … “security software and services.”  They might be a fine company, but it colors my belief in their findings  that this previously unknown but purportedly enormous problem has a solution that they happen to sell?!

The revelation that publication of survey data can be intended to push product reinforces the premise of a useful book called Clear and Present Safety.  The gist is that since President Dwight Eisenhower first warned in 1960 about what he called the “military-industrial complex,” we have lived in a world which is simultaneously safer and more filled with fear-mongering than ever before.

This “threat inflation,” as the authors put it, is no less an issue for venue and event professionals.  The Unisys article reminds us that we are frequently invited to focus on someone’s idea of a worst case scenario, some shiny object of the moment, some threat which can be addressed by buying a product or service for a low, low price.

Perhaps, however, it is not quite time to cancel your Summer shows.  Fear is no way to assess or manage risk – facts are.  This is why I try to refocus people on the routine risks that events face every day, where easy wins are achievable by fixing simple problems.  The most recent tool in this effort is a game I developed, Risk Management Jeopardy!  I presented it for the first time last weekend at an event safety conference in Denver.  It was well-received. 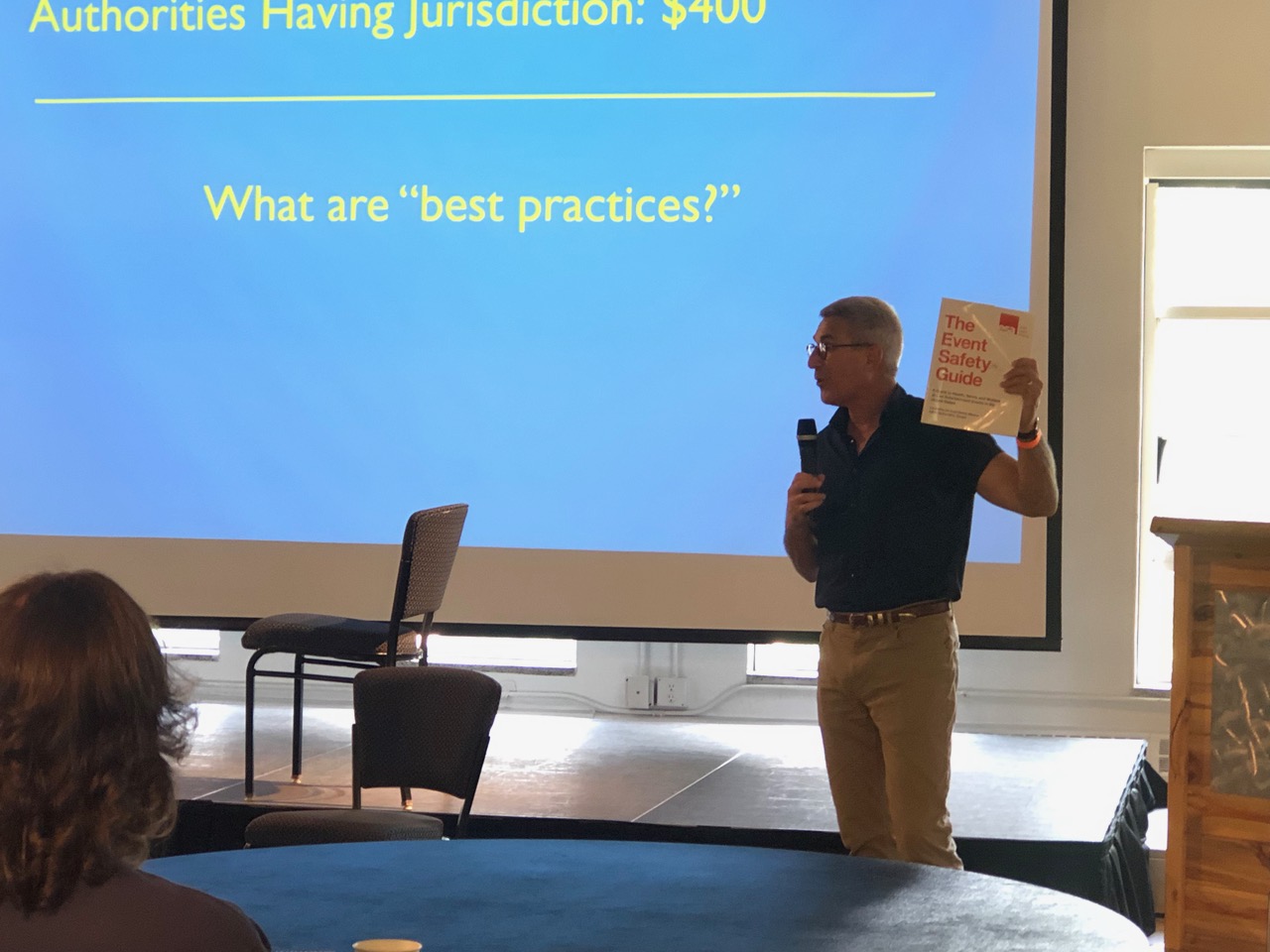 Adults learn interactively, so I like a game played with one’s colleagues that teaches valuable lessons while empowering everyone to realize how much they already know about risk and safety.  This is the idea behind tabletop exercises, so it’s not as if I invented this wheel.  But a learning environment that helps you address real problems that you are likely to face, without fear-mongering, that has teams and its own theme music – now we’re talking!

Baseball Netting: Coincidence? I Think Not.

Faithful readers will recall my analysis from earlier this month about Major League Baseball’s safety problem.  As above, it may be a matter of threat inflation, but absent verifiable data, fans can’t know if we’re actually less safe than in the past or if there are just more bad optics now.

What we know, based on the proliferation of media accounts and images of bloody children and adults at the ballpark, is that the narrative – the ballpark isn’t safe – has connected in the United States.  With that in mind, I issued this pronouncement just two weeks ago:

So here it is, Adelman on Venues‘ official position on baseball netting:

Extend the netting already, foul pole to foul pole, so we can get back to talking about the game.

I’m not claiming that the White Sox and Nationals were entirely influenced by Adelman on Venues.  I’m not saying they weren’t, either.  In any event, I look forward to other clubs following suit.  And when people ask why this might have finally happened now, you can offer them a coherent reason – Adelman said so.