Skip to content
> Uncategorized > Fighting in the Street
Everywhere I hear the sound of marching, charging feet, boy.
‘Cause summer’s here and the time is right for fighting in the street, boy.

Every Sunday during this summer of tragedy and discontent, I hike for a couple of hours with some friends.  Mostly I spend that time venting.  Rather than making you wake up early to walk with me in the heat, I am providing some topics for your own further discussion.

CHARLOTTESVILLE AND TIME, PLACE, AND MANNER LIMITATIONS ON SPEECH

The First Amendment right to express even ideas that are hateful or offensive to some people is essential to the concept of American liberty.

This is not, however, an unlimited right.  To the contrary, there is a lengthy constitutional analysis that lawyers and judges address when deciding what limitations on speech are permissible. 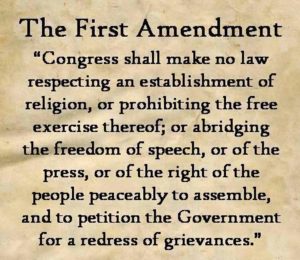 Without providing a law school explanation of what are known as “time, place, and manner” limitations on speech, suffice to say that purely political speech is entitled to much greater protection than “fighting words,” which is speech that is likely to incite violence.  For the August 12, 2017 “Unite the Right” rally in Charlottesville, Virginia, this was an important distinction.  The eleventh-hour effort to relocate the demonstration against removing the General Lee statue from downtown Charlottesville to a city park failed, it seems, because of the demonstrators’ explanation of their intentions.

They claimed that they were coming to Charlottesville for a political event whose location was important to their purpose, and therefore deserving of the highest degree of protection.  Had the court looked at these demonstrators more skeptically, this Alt-Right rally might instead have been viewed as a forum for “fighting words,” which pose a greater threat to public safety and receive much less constitutional protection.  In other words, this judicial interpretation allowed the confrontation to take place on city streets rather than on open park land.

I am providing this brief constitutional explanation so you understand that “freedom of speech,” like every other legal concept I raise with you, is not an absolute rule, but rather a function of its context.  Even in public places, expression can be limited.  And within private venues, such as your own home, there is no constitutional protection for speech at all.  If this is an issue for you, then let’s talk.

Before I attended law school, I was working on a Ph.D in History, with the intention of being a college professor.  My dissertation advisor hated the line, “everything is relative.” It struck her as especially lazy thinking, but we struggled to identify concepts that were absolutely true in every situation.

In the end, we were sure of only one: “Nazism is bad.”

I am happy to share my own political views, but not in this forum.  However,  the reluctance to place full responsibility on the wrongdoer is also important for public accommodations that might one day face their own weaponized malcontents.  So let’s talk about that.

Faithful readers know that I focus on crowd management, including how to respond to active shooters, bombers, and vehicles.  A Florida appellate court‘s reversal of a jury verdict against a hotel recently caught my attention.  [The highlighting in this and the next two cases is mine, so you can find the good parts more easily.]

The short version is that a severely intoxicated lady in Ft. Lauderdale drove her car over a curb, through some trees, into a concrete structure that collapsed on a pregnant hotel guest, killing the guest and wounding her husband.  At trial, the jury awarded the husband a total of $24 million.  Most of the fault, 85%, was assigned to the drunk driver, for obvious reasons.  But even though evidence showed that in the 49 years this stretch of road had existed, none of the prior 30 million vehicles had ever jumped the curb, the jury assigned 15% of the fault, or $3.6 million in damages, to the hotel.  In other words, despite evidence that the hotel contributed to the harm only by being there, the jury found fault ‘on many sides.’

Last month, the appellate court reversed the award against the hotel.  The reason is that as a matter of law, a venue cannot be liable to a victim who is injured by a “freakish and improbable chain of events.”

This made so much sense to me, that courts would reject simplistic equivalencies in favor of evaluation of the facts on their own merits, even when that evaluation would clearly leave innocent victims with recourse only against judgment-proof defendants, that I decided to see if it had happened before.

In the Aurora movie theater shooting, the federal court in Colorado issued a ruling last year that completely exonerated the theater operator, Cinemark.  The reason was that there had been no prior instances of “crimes of the nature and type at issue,” so the venue had no legal duty to foresee and prevent something that had never happened like that before.

Cinemark, in turn, relied on a 1987 California decision in which a McDonald’s was found not liable to any of the victims of a massacre that 21 dead and many others injured.  A shooter walked in, said nothing, and began firing until a police sniper took him down.  In the subsequent lawsuit, the court held as a matter of law that “a maniacal, mass murderous assault” was “so unlikely to occur within the setting of modern life that a reasonably prudent business enterprise would not consider its occurrence in attempting to satisfy its general obligation to protect business invitees from reasonably foreseeable criminal conduct.”

Some might argue that modern life has changed since 1987, and that weaponized malcontents are now reasonably foreseeable for all public accommodation 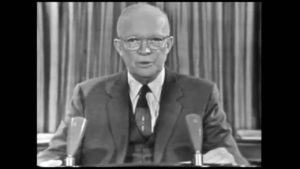 s.  I don’t think so.  I recently had occasion to watch President Dwight Eisenhower’s 1961 Farewell Address, which I recommend to you highly.  In his well-measured remarks, he warned against “unwarranted influence” by that era’s “military-industrial complex.”  In Ike’s honor, I have taken to calling the cottage industry of consultants trumpeting high-tech police and military solutions for entertainment spaces our own “security-industrial complex.”

My initial research shows that the law does not impose a general duty to foresee and prevent intentional acts of violence on your premises, unless something specific makes those acts reasonably foreseeable under your circumstances.  This is good news for the operators of venues and events, as well as good sense.  From my lofty perch as faculty with Arizona State University, I will continue my research and produce a law review article about this particular false equivalency.  Stay tuned.

PHOENIX, AND THE LIMITS OF PLANNING

On Tuesday evening, August 22, 2017, the circus came to my city. I joined the crowds outside the Phoenix Convention Center in anticipation of the President’s campaign rally. The downtown streets were lined with supporters waiting to enter the building, surrounded by demonstrators and law enforcement.

The public safety officials here showed that they had learned from Charlottesville (and last week’s vehicle assault in Barcelona). Many police wore riot gear, streets were blocked with barricades, law enforcement vehicles, and public works trucks, and demonstrators were generally kept separated. I noticed that even the trash barrels had been removed, a lesson from the Boston Marathon bombing. Clearly, this was a well-planned and well-implemented security effort.

Alas, everyone seems to get their own teachable moment.  In Phoenix, police ultimately resorted to tear gas to get the last demonstrators to leave downtown.  I am not aware of any serious injuries, but the optics were bad, and the City promises an after-action report.  We’ll see if they find bad conduct ‘on many sides.’

THE FUTURE AIN’T WHAT IT USED TO BE

In some golden age in the past, putting on a show or running an event space was mostly about helping people have a good time. Now we have to worry about demonstrations, guns, bombs, trucks. The line between entertainment and real life is increasingly blurred.

Even so, thoughtful people can draw meaningful distinctions between right and wrong, between what is merely possible versus reasonably foreseeable. When thousands of people are trusting you to make reasonable decisions about their safety and security, everything is not relative.